Thank you for joining us for another day of Oscraps 12 Days of Christmas and Holiday Cheer. This is Clara again and I cannot believe we are already on day 9. We have a fabulous sale for you today from Creations by TinaMarie. She is offering a ONE DAY ONLY SALE with her shop being 30% off all day. Keep reading to see a really fun challenge and today’s Photo Topic.

Click on image to be taken to her store

Hanukkah
Today I thought we could touch on a non-Christmas Holiday Tradition. So, let’s talk about the Holiday of Lights – Hanukkah. I have always heard of Hanukkah but really know nothing about it. I thought this was a great opportunity to learn a little something about another religion and culture.

Significance of Hanukkah
According to Jewish law, Hanukkah is one of the less important Jewish holidays. However, Hanukkah has become much more popular in modern practice because of its proximity to Christmas. Hanukkah falls on the twenty-fifth day of the Jewish month of Kislev. Since the Jewish calendar is lunar based, every year the first day of Hanukkah falls on a different day – usually sometime between late November and late December. Because many Jews live in predominately Christian societies, over time Hanukkah has become much more festive and Christmas-like. Jewish children receive gifts for Hanukkah – often one gift for each of the eight nights of the holiday. Many parents hope that by making Hanukkah extra special their children won’t feel left out of all the Christmas festivities going on around them.

Lighting the hanukkiyah (menorah)
The hanukkiyah is used during the Jewish holiday of Hanukkah and commemorates the miracle of the oil. According to the Hanukkah story, once Jewish revolutionaries had retaken the Temple from the Syrians they wanted to rededicate it to God and restore its ritual purity. Eight days worth of oil were needed to complete the ritual purification, but they were only able to find one day’s worth of oil. They lit the menorah anyway and miraculously the oil lasted for eight full days. In commemoration of this event Hanukkah is celebrated for eight days and a candle is lit on the hanukkiyah on each of those days. One candle is lit the first night, two the second, and so on, until the final night when all the candles are lit. Each of the eight candles is lit with a “helper” candle known as the shamash. The shamash is lit first, is used to light the other candles, and then is returned to the ninth candle spot, which is set apart from the others. 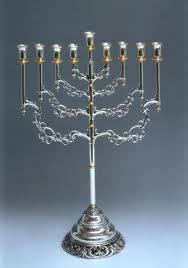 Spinning the dreidel
A dreidel is a four-sided spinning top with a Hebrew letter on each side. It is used during Hanukkah to play a popular children’s game that involves spinning the dreidel and betting on which Hebrew letter will be showing when the dreidel stops spinning. Children usually play for a pot of gelt, which are chocolate coins covered in gold colored tin foil, but they can also play for candy, nuts, raisins – anything really! A game similar to the dreidel game was popular during the rule of Antiochus. During this period Jews were not free to openly practice their religion, so when they gathered to study Torah they would bring a top with them. If soldiers appeared, they would quickly hide what they were studying and pretend to be playing a gambling game with the top.

Eating fried foods
Because Hanukkah celebrates the miracle of oil, it is traditional to eat fried foods such as latkes and sufganiyot during the holiday. Latkes are pancakes made out of potatoes and onions, which are fried in oil and then served with applesauce. Sufganiyot are jelly-filled donuts that are fried and sometimes dusted with confectioners’ sugar before eating.

To get you started I found some more Christmas kits that are so fun. Images are linked.

Photo Of The Day: Snow
For today’s photo we want to see snow. White landscapes, mountains, snow in a can, or a snow globe. I know I don’t have any snow here in Fayetteville, NC so I will have to be a little bit creative. Let’s see what type of snow you can photograph.

Look What’s at the O!